On February 11, City Council awarded a construction contract to Alamo City Constructors, Inc. for the 2018 SPAM Rehabilitation Projects. This project consists of three different project areas. Randolph between Main and Exchange will be reconstructed; Schertz Parkway between Live Oak and Beck will receive a “mill and overlay”; and a portion of the Northcliffe area will have their streets rehabilitated.

The Schertz Parkway “mill and overlay” involves grinding off the existing pavement surface. After the surface is removed, new layers of asphalt will be placed. In order to increase the strength of the pavement section, so it can better withstand the traffic loads, the entire existing asphalt and a small portion of the base underneath the pavement will be removed. This is so we can replace the existing two inches of asphalt with four inches of new asphalt. The new asphalt pavement will be placed in two layers. There will be alternating lane closures in the project area during the construction process. Two-way traffic and business access will be maintained, but it may take longer to get through the project area during construction. Please be patient and allow extra time while going through the project area.

The Schertz Parkway asphalt overlay from Beck to Live Oak will start on Tuesday, June 23. The work will be done in multiple segments, each one being about 1,200 feet long. In each segment, the contractor will work on one half of the street at a time. For each segment of work, traffic will be restricted to one lane in each direction, on one side of the street similar to the traffic control set up for the reconstruction project going on between Maske and Woodland Oaks. Each segment will take two days to complete, and work will start on the south end of the project, near the railroad tracks. The contractor will do the east side of the street first, then the west side. Work will progress in this manner northward until the project has been completed. Milling and placement of the first layer of new asphalt will be placed on day one and the remaining layer of asphalt will be placed the following day. At the end of each day, the traffic control will be removed and traffic will go back to normal overnight. The total project is expected to be completed in 16 working days (four segments on each side of the street). During the construction of each segment, there will be times that access will be limited across some intersections and driveways. The contractor will have personnel helping direct traffic through the intersections and driveways during the construction process. Please be patient, slow down, follow the traffic control devices, and allow extra time to travel through the project area. Please be extra aware that the traffic control will change every other day as this work is completed. 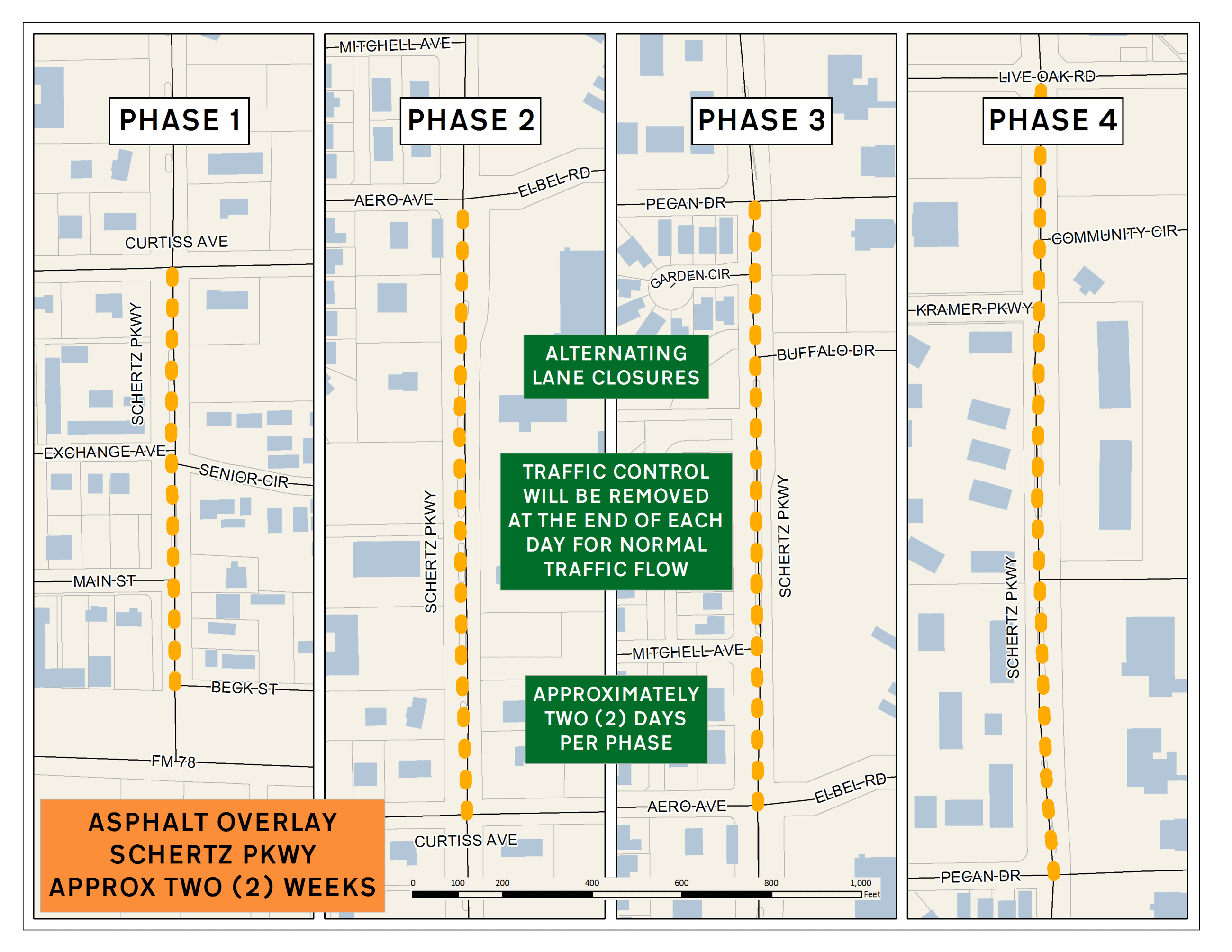 On November 12, City Council awarded a construction contract to D & S Concrete Contractors for the reconstruction of Schertz Parkway from Maske Road to Woodland Oaks Drive. D & S Concrete Contractors plans to begin Phase I of the project on April 7, 2020, by reconstructing the east side of Schertz Parkway. The existing asphalt street section will be replaced with stronger, more durable concrete pavement. The median island on Woodland Oaks Drive will also be modified. The front of the median will be pulled back, out of the crosswalk area, and the width of the median will be decreased to allow for two lanes for cars approaching Schertz Parkway. The asphalt pathway on the east side of Schertz parkway will also be re-built. The new pathway section will be similar to the re-built roadway between Live Oak Road and Maske Road which was completed in March 2018. Traffic will be restricted to one lane in each direction during construction. The Woodland Oaks intersection will also need to be closed for a portion of the construction process. The complete reconstruction is estimated to take five months. 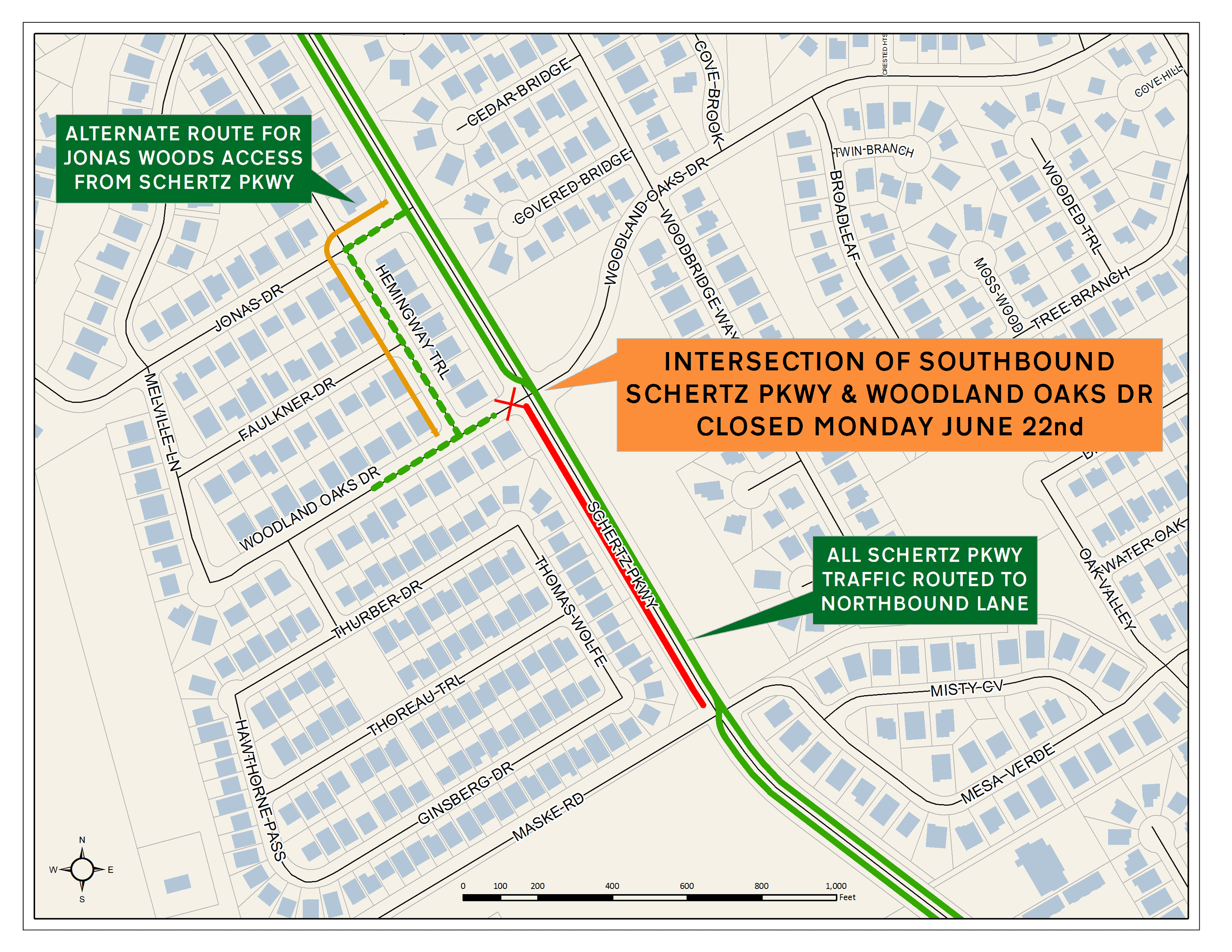 Schertz Parkway reconstruction: Work has begun on the west side of the street.  The asphalt has been removed and the contractor is hauling it off.  Next week the contractor will do the curb removal and excavation for the new concrete section.  With favorable weather, the contractor expects to do the first concrete pour on July 7th.

Schertz Parkway overlay: Start of the project was delayed this week due to the rain on Tuesday and the initial rain forecast.  While we did get rain on Tuesday, the additional forecasted rain did not materialize.  The work is expected to begin on Monday and will continue through Friday, even though City offices are closed on Friday.  The work will continue into the following week.

The remainder of the curb at the intersection and the curb for the pathway have been poured. Tomorrow the ADA ramps will be poured. On Monday, June 15, the pathway will be paved. The contractor will then do clean up and prepare to switch traffic control to start work on the other side of the street. The traffic control switch will happen by the end of next week.

All of the concrete pavement has been placed. The contractor expects to complete the remaining segments of curb and the ribbon curb for the back edge of the multi-use path this week. Next week the plan is to pave the multi-use path and do clean-up activities. Once these items are complete, the traffic control set up will be changed. Traffic will be placed on the new concrete pavement on the east side and work will begin on the west side of the street. Completion of the multi-use pathway and the traffic control switch could be delayed by weather.

Forms have been set and prep work has been done to start pouring the new concrete pavement. The concrete pour began at 5:00 am today and the contractor successfully completed the main lane pavement for this phase of the project. Additional pours will be required to complete the curb, turn lanes, and the intersection at Woodland Oaks Drive.

The street excavation on the east side of Schertz Parkway is almost complete. The excavation and curb and gutter removal will be completed early next week. The cement treatment of the subgrade will start once the curb and gutter has been removed. After the treatment is completed, the contractor will start forming up the new concrete pavement section.

The contractor has begun the removal of the existing pavement on the east side of Schertz Parkway between Maske and Woodland Oaks. Traffic is restricted to one lane in each direction and left turns are prohibited at some intersections in the project area. This entire side of the street will be re-built with a new concrete pavement. It is expected to take 45 days to complete the reconstruction on this side of the street. Part of the intersection of Woodland Oaks is closed and will remained closed until this side of the street has been completed. Please refer to the detour map for information on how to avoid the closed portion of the intersection. We ask for your continued patience and understanding as we complete this project. Please slow down, obey the traffic control devices, and allow extra time to travel through the project area.