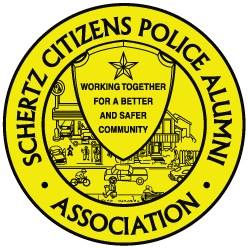 Any U.S. citizen who is at least 18 years old may become a member of Schertz Citizens Patrol, provided they are of good moral character, free of felony conviction, and successfully complete the application, background, and training process. A volunteer is a non-salaried individual who offers his/her services for a limited time, acting in a specific capacity willingly by one’s own accord. A volunteer has no salary, benefits or labor relations rights of a City employee and serves “at the will” of the Chief of Police. A volunteer can be placed in or removed from volunteer duties by the Chief of Police with or without cause. The volunteer will complete and sign the Schertz Citizens Patrol Agreement.

The mission of Schertz Citizens Patrol is to enhance the individual and collective safety and general welfare of all people of the City of Schertz by assisting the Schertz Police Department in deterring crime in Schertz. The primary method used to deter crime will be to provide high visibility patrol within the City.